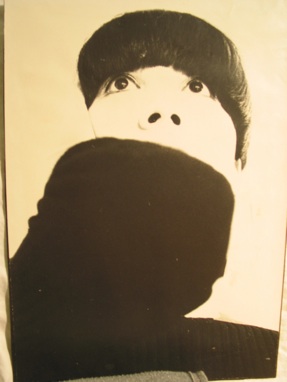 Leslie Li is the author of three books — Daughter of Heaven: A Memoir with Earthly Recipes (Arcade), Bittersweet: A Novel (Tuttle), and Enter the Dragon, a book of children’s plays based on three Chinese folktales (Main Street Arts Press).  She has written feature articles and personal essays for numerous publications, including The New York Times, Gourmet, Saveur, Travel & Leisure and Garden Design. Her books have been translated into German, Dutch, Thai and Chinese and in early 2011 her culinary memoir will be translated into Portuguese.

Officially, Kim Loo Sisters: Portrait in Four-Part Harmony is her first film.  Technically, she produced and starred in an experimental narrative film (please see publicity photo at left) based on a story she wrote in college about a young girl who kills her little brother to win the love of her emotionally distant mother.  Fratricide couldn’t be farther from the theme Li has chosen for her documentary — the unbreakable bond of sisterhood and how it sustains the four Kim Loo Sisters over nine decades.  Contact Leslie Li at lesliedli@gmail.com.